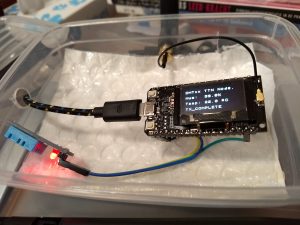 Time for part 2 of the post about getting the “cheap” Chinese ESP32 + SX1276 board connected to The Things Network.

The picture in this and the other post shows the board with a DHT11 temperature and humidity sensor already connected. I stopped using the small case that was on sale, because with the pinheaders soldered to the board and dupont cables connected to it, it no longer fitted.

Also, I am no longer using the small antenna that was provided with the board. I seem to have accidentally 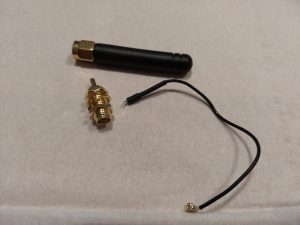 twisted the cable that you use to connect the SMA socket to the U.FL IPX connector on the board. The only suitable antenna I had available, was one that was provided as part of the LoPy kickstarter kits (which apparently is different from the antenna sets they sell now). The antenna I got in the kit is a RP-SMA antenna meaning the cable is also RP-SMA. Long story short: I can connect the LoPy cable + LoPy antenna to the board, but the the provided small antenna won’t fit on the LoPy cable. With the LoPy antenna combi I’ve been able to get about 500 meters range outdoors, combined with the single channel LoPy nanogateway. Which is absolutely not bad at all, also given that I’m fixed not to just one channel there but also to SPF7. I’ll do further comparisons once the replacement cable has arrived.

So, the DHT11 sensor. It helped that I managed to figure out that the provided pinout chart was incorrect. Once I know to which actual ports the DHT11 was connected, it was a matter of integrating the library and code into the existing code.  To keep the number of things that could go wrong manageable, I first tested jut the DHT11 code. I provided an example here. If that doesn’t work, don’t bother with the connection to TTN.